Get an idea of what you can see through a telescope according to its power.

The rendering is more or less realistic according to the intended use: visualize the field and magnification obtained, or simulate the details accessible with an instrument.

The simulated true field is a representation of the field obtained in real observation, relative to the size of the observed star.

The size of the image is representative of the magnification and the apparent field in real life, provided that it is placed at a short distance from the screen. Depending on the characteristics of your screen (definition & resolution), this distance will be about the width of the screen, or even less in some cases (wide screens used at the maximum definition). For example, if you simulate an ultra-wide-field eyepiece of 100 ° of apparent field, the image should fill almost all of your field of vision when you close one eye.

However, the following parameters can have an important influence and are not taken into account:

For the observation of weakly luminous objects such as nebulae or galaxies (“deep sky”), it is the luminosity of the instrument that is decisive. The simulator takes this into account by simulating, to a certain extent, the luminosity of the instrument as a function of its diameter. Thus, the spiral arms of the hunting dog galaxy (M51) will appear much better with a telescope of 600 mm, for example, than with a telescope of 250 mm. The simulator thus has a pedagogical value and is appropriate to get a rough idea of ​​what one can hope to see with a given instrument.

But be careful, the following parameters can have an important influence in real situation and are not taken into account:

In addition, the screen setting and brightness of the room change the perception of the simulated image: avoid strong lighting, and use a monitor that is set to brightness and contrast.

Finally, the overall rendering can be quite distant from reality because it is very difficult to account for all the shades of light. Thus, the image obtained in a real situation will be more pleasant (except instrument of poor quality or polluted sky) because of richer nuances: the brightness of the stars and the texture of the nebulosities will be better rendered. A simulation will never replace direct observation, whether from the point of view of realism or from the point of view of the pleasure felt! 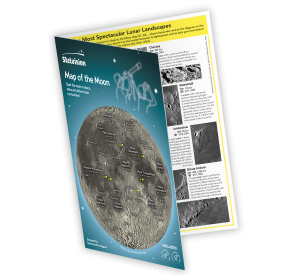 for fun and easy exploration!
Stelvision's Map of the Moon